Hoover is a city shared between Jefferson and Shelby counties in north central Alabama, USA. This is the largest city in the suburbs of Birmingham, with a population of 62,742 in the 2000 census and 81,619 in the 2010 census. Hoover is part of the AL MSA (Metropolitan Statistical Area) in Birmingham-Hoover, and is also included in the Birmingham-Hoover-Cullman AL CSA. The Hoover neighborhoods and these communities are located along the foothills of the Appalachian Mountains. The city is home to the Galleria Riverchase, one of the largest shopping centers in the southeast states and one of the largest mixed-use centers in the United States with 222,967 m2 of sales space. The complex includes the commercial Riverchase Galleria, a hotel, and offices. The resort's main stores are JCPenney, Belk, Macy, and Sears. The Barons of Birmingham, a minor league baseball team founded in 1885, plays his home games at Regions Park with 10,800 seats. Michael Jordan spent a season with the Barons in 1994. 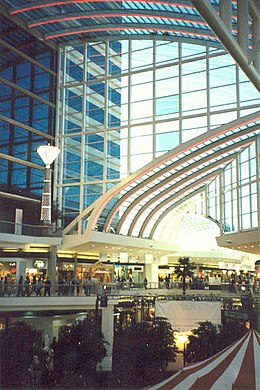 The city of Hoover became a municipality in 1967. She was named after William H. Hoover, owner of a local insurance company. The area was known as the Hoover community since the 1930s and was as a whole a residential community. In the 1970s and early 1980s, the city was still mainly residential with a small town hall that included a room for police services. The annexation of the business and the residential community Riverchase provided a base for large office buildings and employers for the city. The opening in the early 1980s of the interstate interstate highway I-65 to I-459 brought about significant changes by placing the city at an important crossroads of the state's motorway system. The most dramatic change occurred in 1986 when the Riverchase gallery (shopping mall, hotel, office complex) opened. This greatly increased the city's tax revenues and served as a catalyst for bringing new residents and businesses. Hoover then grew and developed at an extremely rapid rate, also aided by the annexation of several communities. The city now has many public facilities, including a municipal center, a library, and a public security center. Residents and businesses are attracted to the city for its hills and beautiful residential areas, schools, municipal services, shopping centers, and business communities. The city is likely to continue to thrive; its population has increased significantly since 2008 and is currently 81,619 according to the 2010 census.

The mayor and the city council are elected for a four-year term on a simultaneous non-partisan basis, taking office on the first of October of the election year. Political decision-making and legislative authority is exercised by the municipal council, which consists of seven elected members (before 2004, the council was composed of five members.) The city council is responsible for reviewing local resolutions and regulations, adopting an annual budget, and appointing members of local councils and committees. The mayor is responsible for enforcing and enforcing the city's policy and ordinances.

When the municipality was created in 1967, Donald Watts was the first mayor of Hoover, and served for a year. In 1968, Edward Ernest was elected Hoover's second mayor for a four-year term, but was forced to resign for health reasons the following year and O.E. Braddock then took over as a member of the city council. Braddock died suddenly in 1975 and John Hodnett was appointed to complete his term. Frank Skinner became Mayor of Hoover in 1980 and held that position for 18 years. However, in 1999, he was forced to resign and plead guilty to a charge of covert financing of campaign accounts for which he failed to report $10,000 that he allegedly received as a donation. Councilor Brian L. Skelton then replaced him to finish his term. The 2000 election invested Councilor Barbara McCollum when she defeated Skelton, becoming Hoover's first woman mayor. In 2004, McCollum lost his re-election, coming third behind Tony Petelos and Councilor Jody Patterson. Petelos wins the 2004 and 2008 elections without opposition. He resigned in September 2011 to fill the newly created position of Jefferson County Manager, and municipal council president Gary Ivey was appointed to fill his term.

(Sources: Census of the United States)